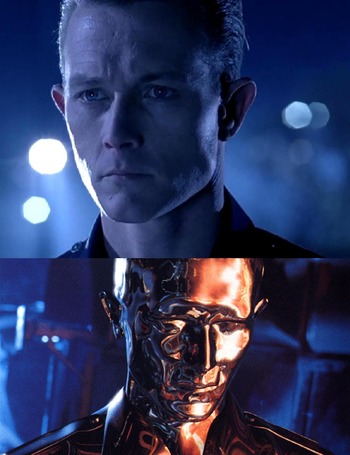 Robert Patrick before and after signing a deal with Apple.
Fuzzy: Uh... You could take your real form if you want. I mean, I'm cool with it.
Jess: This is my real form, dummy.
Fuzzy: But I thought...
Jess: That I'm a giant slug monster, right? That may be the packaging, dude, but this is who I am. You get the difference?
Fuzzy: So, like, you identify as a smoking hot babe?
Jess: Nah. The smoking hot part is just the shape-shifter bonus.
— Sam & Fuzzy 1732

A Shapeshifter (or a Master of Disguise or Master of Illusion) can look like anyone, and sometimes anything. But most such characters will have a regular form that they usually appear in.

This is either because they like that particular appearance, because they need to present themselves in a consistent (or more normal) appearance for the sake of others, or it's simply because that's what they and/or their species normally looks like. It usually depends on how their particular style of Shapeshifting works.

For more practical reasons, this is just easier to draw. Or it's implemented so that a single actor can be cast in the role.

The only time this might be a problem is when a shapeshifter is an assassin or otherwise working in espionage. Their enemies have seen the face of the shapeshifter, yet they remain using that same appearance in everything. This is rarely addressed; it is assumed to be part of the Willing Suspension of Disbelief.

There are also variations regarding the nature of shapeshifting within the fiction itself. There might be mass displacement or other limitations.

Of course, in the real world an individual has many options, either superficial (clothing, cosmetics and jewelry) or intensive (plastic surgery and tattoos), to appear as their "preferred self-image." It certainly isn't unlikely that a shapeshifter would have the same desires.

There are usually two types of Default Forms:

Some shifters can use a combination of the two. Compare A Form You Are Comfortable With, Sleep-Mode Size, Super Mode, Morphic Resonance, and (of course) This Was His True Form. Tends to go hand in hand with Coconut Superpowers. Contrast Appearance Is in the Eye of the Beholder, which doesn't necessarily shift deliberately and can look like different things to more than one person simultaneously, eliminating the need for a preferred form. A Morph Weapon is a usually non-sapient example in which its "default" form is its original/not-in-use appearance or the one its wielder prefers using.