Sentenced to Down Under 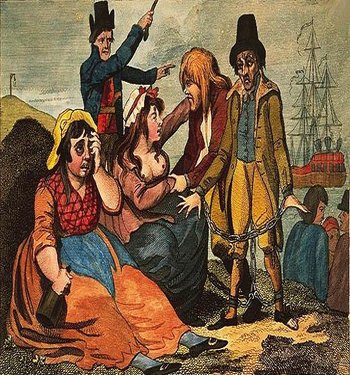 Black-eyed Sue and Sweet Poll of Plymouth taking leave of their lovers who are going to Botany Bay, 1792
"Australia: Bet you wish YOUR great-great-great grandfather stole a loaf of bread."
— Seen on a T-Shirt
Advertisement:

When the British colonized the continent of Australia in the 18th century, they established it as a dumping ground for their overcrowded prisons. Traitors, arsonists, grave robbers, petty thieves, debtors, and anyone else who found himself convicted by the (in)justice system of the time were sentenced en masse to the Land Down Under simply to clear backlogs. Men, women, and children of all ages found out the hard way that it was very easy to score a one-way ticket beyond the seas. This was possibly the original source for the term "Kangaroo Court".

This trope is for instances of this special punishment. More often than not, this comes up in period pieces, due to this practice ending in the Victorian era.

Modern works, especially Science fiction or Space Opera, may revive the idea of a far-off colony/world only suited for depositing troublemakers and make direct allusions to the original.

Sub-Trope of Penal Colony. Compare Trading Bars for Stripes, where the prisoner is put into the military instead, and Reassigned to Antarctica, when you technically haven't been convicted of anything and it's technically not a prison sentence but the effect is still the same. Also compare The Exile and Persona Non Grata, where you aren't sent anywhere specific, but can't come back in to your country.

To make the whole thing go away, the board agreed to let Scrooge and Marley buy out Jorkin's debts — and control of the company.