Series / Against the Wind 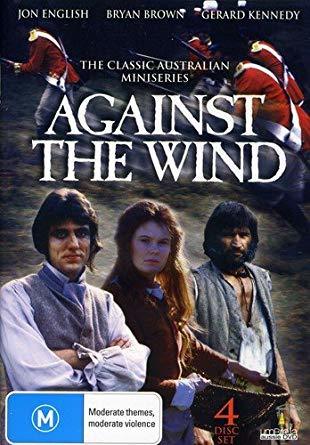 Yet, Freedom, thy banner torn and flying, flows like the thunderstorm Against The Wind (Lord Byron).

Against The Wind is a historical TV series, spanning the years from 1797 to 1810, telling the story of Irish and english convicts and their role in building the society that eventually would become modern Australia. The series was made in eleven parts, written by Bronwyn Binns and produced by Seven Network Operations.

The story follows Mary Mulvane (played by Mary Larkin), an Irish girl who gets transported from Ireland in 1798, because of allegations of helping the rebel Michael Connor (who was actually helping her getting her cow back). She dreams of getting back to Ireland after seven years of transportation, but gets tangled up in Australia, both romantically and politically.

kills many dreams of a free Ireland, and Mary is advised to stay on in Australia, where she eventually marries Jonathan and builds a farm with him. The Rum Corps, however, puts the entirety of New South Wales under strict military rule, which angers both the settlers and the convicts, and the Irish convicts rebel in 1804. The rebellion is struck down, and many of the rebels are shot or hanged for it.

Jonathan decides to rebel in his own way, through the letter of the law, and is imprisoned for it, but new officers arriving from Britain put an end to this rule, and a new society develops.