Series / Escape of the Artful Dodger 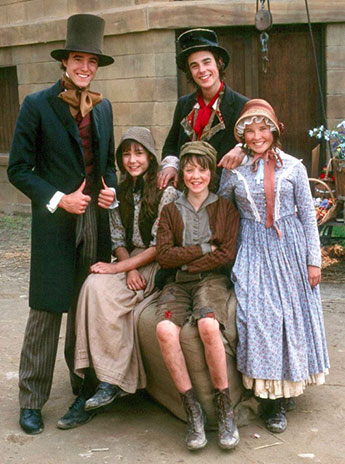 Escape of the Artful Dodger is an Australian children's television series from 2001, which ran for one season (thirteen episodes) and starred Luke O'Loughlin as the Artful Dodger and Rowan Witt (Spoon Boy) as Oliver Twist.

The series is a Broad Strokes sequel to the classic novel Oliver Twist, and centers around Jack Dawkins ("Known to my friends and hintimate acquaintances as the Artful Dodger"), who after his arrest is being sent to the penal colony of New South Wales, Australia, together with another prisoner around the same age, named "Wild" Will Grady; really an aspiring actor framed for crimes he didn't commit. On the same ship is also Oliver Twist, who is being sent to Australia by his grandfather, Mr. Brownlow (officially so that he can learn the family shipping trade, but in reality because Mr. Brownlow wants to get him away from the corrupting influences of London) and Hannah Schuller, a German family friend of Mr. Brownlow's, who is going to Australia to live with her brother Michael.

On the journey to Australia, Oliver learns that the ship's bo'sun is planning to steal Hannah's jewelry and both frame and kill the Dodger and Will for it, and soon all four of them are on the run from the law — thanks to the head of the law in New South Wales, the greedy and corrupt Sergeant Bates, who has sneakily taken over Mr. Brownlow's warehouse and is turning a good profit that he doesn't want to lose, and therefore grabs all the chances he can get in order to get Oliver out of the way. Furthermore, Hannah's brother Michael has disappeared without a trace, and they have to find out what happened to him if they're going to have any hope of proving their innocence of the various crimes Sergeant Bates is accusing them of.

A few citizens of New South Wales, who don't like Sergeant Bates, are willing to give what aid they can — most notably the young cleaning lady Becky Micawber (daughter of Mr. and Mrs. Micawber from David Copperfield) and the kindly Dr. Hartman, who become the group's main allies — but things don't exactly get easier when it turns out that the Dodger's old mentor Fagin has also made it to New South Wales, now with a new gang of urchins led by a tomboyish girl named Kelly, who views herself as the Dodger's replacement and is not happy at seeing her predecessor turning up on her turf.

It's fortunate that the Artful Dodger has so many tricks in his arsenal, because he's going to need them if he's going to help Hannah and Oliver straighten everything out, find Hannah's brother, deal with his complitated relationship with Fagin, and most importantly become a serious thorn in the side of that villainous lawman, Sergeant Bates.