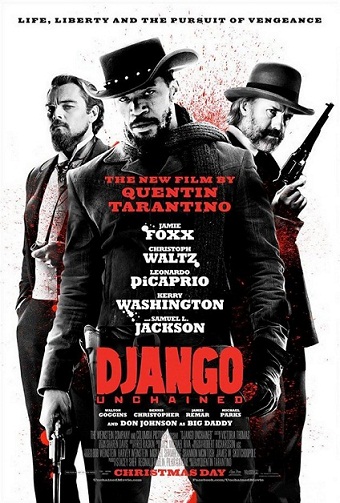 "Adult supervision is required."
"The D is silent. His revenge isn't."
— Tagline
Advertisement:

Django Unchained is a 2012 film written and directed by Quentin Tarantino (his seventh film overall). While it's in the style of a Spaghetti Western (paying particular homage to the 1966 film Django) and has the thematic drive associated with the "revisionist" side of the genre, Tarantino calls it a "Southern" because it is set in the Deep South rather than The Wild West.

The film tells the story of Django (Jamie Foxx), a slave who is freed by German bounty hunter Dr. King Schultz (Christoph Waltz) with the promise that, in return for Django's assistance in a few bounty recoveries, he will aid Django in finding and rescuing his lost wife Broomhilda (Kerry Washington) from the sadistic plantation owner Calvin J. Candie (Leonardo DiCaprio). However, Calvin's head house slave and second-in-command Stephen (Samuel L. Jackson) has other plans.

In 2014, a sequel was announced - a comic Crossover with Zorro, written by Tarantino and Matt Wagner, and "produced" by Reginald Hudlin. It is now officially being made into a film.

The E* in "tropes" is silent. These tropes aren't:

Who was that nigger?