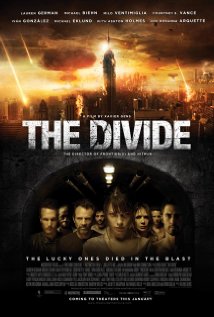 "Well, my plan was to build a fallout shelter and take it easy while my pain-in-the-ass tenants barbecued above me."
—Mickey
Advertisement:

The Divide is an apocalypse film from 2012, starring Michael Biehn and Lauren German.

New York is under attack. The tenants of an apartment building try to escape, but failing that try to get to the basement which the superintendent, Mickey, has rebuilt into a large and well-stocked fallout shelter. Several of the tenants make it in and are trapped in the building's sealed-off basement. The story begins.