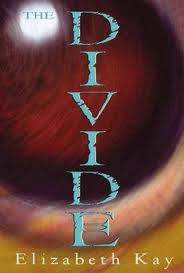 The Divide Trilogy is a series of books by Elizabeth Kay chronicling the adventures of English boy Felix Sanders.

The Divide (2002)
The first book in the trilogy is about Felix, a boy with a fatal heart condition and our protagonist, is on vacation in Costa Rica with him excited to see the Continental Divide between the Pacific and Atlantic Oceans. With his parents preoccupied, he runs ahead as fast as he can to see it. However, when he gets there his condition catches up to him and he collapses. He wakes up to find himself somewhere different entirely face to face with a griffin (or Brazzle in this world), named Ironclaw. The scene shifts to Betony a tangle-child (elf), arguing with her big sister who's going to Tiratattle, a faraway city with her brother. She's told to stay with a family friend for the time they're away, but on the way, she finds a brittlehorn (unicorn), near death who tells her to bring news to his tribe. This eventually leads to Felix and Betony meeting and continuing their adventure to find a way home and maybe a cure for Felix's condition, as well as getting to the bottom of the bad medicine that's been going around.
Back to the Divide (2005)
After getting back from the other world with a healthy heart, Felix is enjoying his summer holiday, when there's a knock at the door, which turns out to be Snakeweed, an antagonist from the first book, whom turns his parents to stone. With nowhere else to turn, Felix makes his way to the nearest Divide to seek help. This story introduces several new interesting beings and characters while continuing the quest to stop Snakeweed from taking over the world.
Jinx on the Divide (2006)
After the events of the second story, Felix's friend Betony is coming over from the other world to experience the things that aren't in her world (trolleys, movies, amusement parks, etc.). However, before she arrives, Rhino, a bully at Felix's school goes through his stuff to discover a magic lamp which Felix had picked up sometime during the second book containing a brandee (djinn), that he had promised to turn human with science so he could be free. The angry brandee kidnaps Rhino and holds him for ransom. Felix must now go with Betony back across the Divide to find a way to get Rhino back safely.

The stories are fond of following several groups of people at once, shifting among them occasionally, with the multiple groups crossing paths multiple times. The story is told in third person, but in a way that only shows what the current group knows and sees. No more books are planned in the series, the author moving on to other projects.