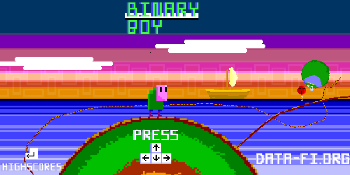 website and can be played or downloaded there. Unlike most other games of this genre, the Player Character is unable to jump and is limited to moving on the single path made for him: however, he is able to go below the path and the gameplay revolves around bypassing the enemies and obstacles through changing the player orientation in time. It has the standard retro visuals and soundtrack associated with many indie games.