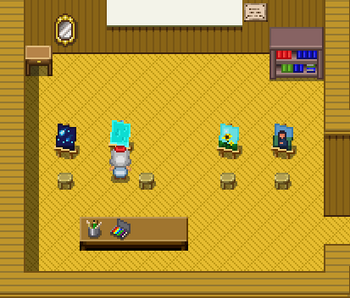 Bevel's Painting is a freeware horror exploration game for PC, made by Maninu in RPG Maker VX.

An artistic young girl named Bevel winds up inside one of her own paintings one day when she discovers the canvas is glowing. Inside, things look magical and fantastical, but things soon turn stranger. Everyone speaks a made-up language called "Bevelese." Bevel meets a girl who looks just like her, but with black hair instead of white; and the Other Bevel is rather insistent on not letting her escape. Memories surface in the form of the rooms that Bevel enters.