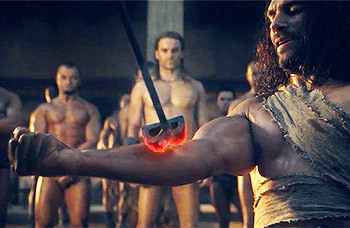 Essentially the idea that when you're a slave, you need something to show it.

This trope centers on the times when a character who either is or was a slave bears some mark that sets them apart from other people. Most frequently this is either a burnt on brand, a tattoo, or even a serial number.

Often, a slave who has been freed will have this mark removed or, if that is not possible, altered. Another option is for them to display this mark openly, as if daring someone to comment.

Compare Mark of Shame, which this brand is to many slaves, and compare Butt Brand and Group-Identifying Feature. See also Slave Collar, which is another way of marking a character enslaved, and Slave Race, where just being born a certain race is enough to mark you as property. For supernatural versions, see Claimed by the Supernatural. More advanced societies might make you a Scannable Man instead.