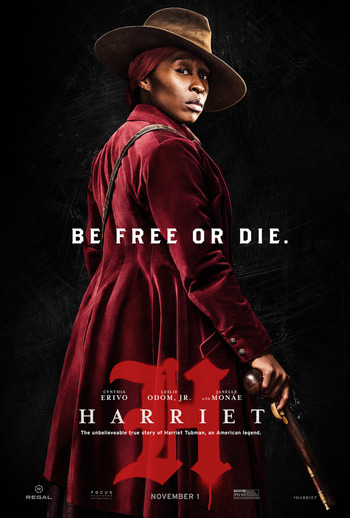 Fear is your enemy.
"If I’m free, my family should be too. I made up my mind, I’m going back."
— Harriet Tubman
Advertisement:

Harriet is a 2019 biopic film covering the escape from slavery of abolitionist freedom fighter Harriet Tubman, as well as her early career as a conductor on the Underground Railroad. It was directed by Kasi Lemmons (who also directed Eve's Bayou), and stars Cynthia Erivo in the title role, with Janelle Monáe and Leslie Odom Jr. featured among its supporting roles.

After a lifetime of slavery at the hands of a hard-hearted Southern plantation family, Araminta "Minty" Ross and her freeborn husband, John Tubman, hire a lawyer to present legal papers proving that Minty and her mother and siblings should have been freed years ago, according to a former "owner"'s will. It doesn't go over well, and Minty finds herself fleeing north to escape the threat of being sold downriver. In the journey that follows, she will find freedom, a new name, and a divine purpose in life: braving unimaginable danger to shepherd hundreds of other enslaved souls to freedom.

The film premiered at the Toronto International Film Festival on September 10, 2019, and received a wide release in the United States on November 1, 2019.