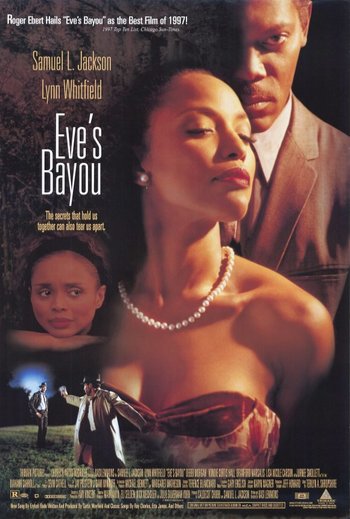 The secrets that hold us together can also tear us apart
"Memory is a selection of images, some elusive, others printed indelibly on the brain. The summer I killed my father, I was 10 years old."
Advertisement:

In 1962, Eve Batiste (Smollett), named for the founder of their hometown, is the middle child in one of Louisiana's most sophisticated and prosperous families. Her sister, Cisely, is 14 and her brother, Poe, is 9. Her father, Louis (Jackson), is a doctor, and her mother, Roz (Whitfield), minds the family. One night during a party, Eve catches her father with another woman, Mrs. Moreaux.

Eve confides in her aunt Mozelle (Debbie Morgan), a sultry fortuneteller. The two are close due to a shared sense of the supernatural. And as Mozelle struggles with her own Cartwright Curse dilemma, the family is in for a summer that changes their lives forever. The movie was directed and written by Kasi Lemmons, and produced by Samuel L. Jackson.