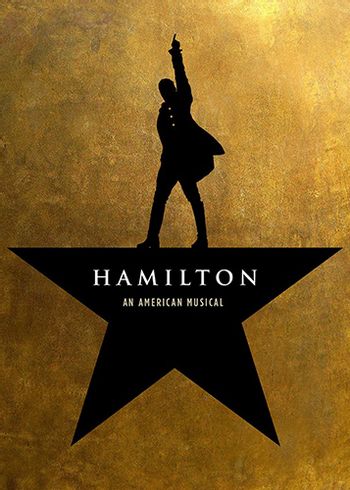 Hamilton is a musical written by Lin-Manuel Miranda, inspired by the book Alexander Hamilton by Ron Chernow. Opening in February 2015 at the Public Theater, the show moved to Broadway in the summer of 2015 before productions later opened in Chicago and London, after which three U.S. national tours were held.

The musical follows the life of Alexander Hamilton, the United States' first Secretary of the Treasury. Beginning with his arrival in the United States (after writing his way out of his miserable, impoverished situation in the Caribbean), it tracks his rise to power through The American Revolution and early days of Antebellum America, and his inevitable fall.

A defining aspect of the musical is that this is all told through a blend of hip-hop, R&B, pop, and contemporary show tunes, which, like those of Miranda's previous Broadway excursion, will be hard-pressed to leave your head. From the musical's origins in the late 2000s, Miranda pitched Hamilton as "someone [that] embodies hip-hop", stating that his story of rising from squalor through his writing is not dissimilar to the classic Rags to Riches tale integral to the genre.

Inspired by the play, a variety of pop, hip-hop and R&B artists collaborated with Lin-Manuel Miranda to create The Hamilton Mixtape, which was released December 2, 2016, and contains demos, remixes, and covers from Hamilton's soundtrack. One year later, Miranda announced The Hamildrops, a monthly release of Hamilton-related content; the first such "drop" was released December 15, 2017.

Disney released a filmed performance of the original Broadway production on Disney+ on July 3, 2020.

open/close all folders
A-G
H-M
N-R
S-Y
"I am NOT throwin' away my shot!"
Feedback

When Burr blames Hamilton for getting in the way of his ambitions via a disagreement, he responds by asking him WHICH disagreement he had, sending him a list of 30 years worth of disagreements. Burr's response? "Sweet Jesus!"

When Burr blames Hamilton for getting in the way of his ambitions via a disagreement, he responds by asking him WHICH disagreement he had, sending him a list of 30 years worth of disagreements. Burr's response? "Sweet Jesus!"