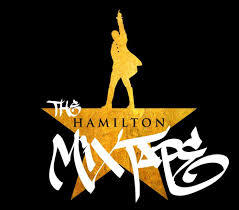 "You ever see a painting by John Trumbull?
Founding fathers in a line, looking all humble
Patiently waiting to sign a declaration and start a nation
No sign of disagreement, not one grumble
The reality is messier and richer, kids
The reality is not a pretty picture, kids
Every cabinet meeting is a full on rumble
What you're about to witness is no John Trumbull."
Advertisement:

The Hamilton Mixtape is an album centered featuring songs made by famous R&B, hip-hop, and pop artists inspired by Hamilton (a musical about the life of one of America's Founding Fathers), whether they be straight covers, remixes, demos or new songs with samplings from the musical. Originally, Lin-Manuel Miranda conceived telling the story of Alexander Hamilton with a hip-hop Concept Album, but eventually decided to turn it into a full musical; after the musical garnered praise from within the music industry, Miranda revived the idea of the album in order to collaborate with the many artists who wished to collaborate with him.

One year later, Miranda followed up with more Hamilton-related content in the form of The Hamildrops.

The Hamilton Mixtape contains examples of the following: