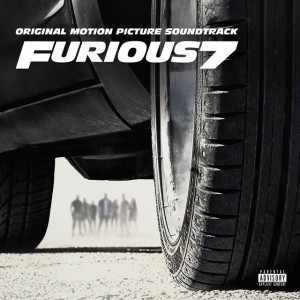 Furious 7: Original Motion Picture Soundtrack is, as you can tell, the soundtrack of the 2015 blockbuster Furious 7. The album features a wide variety of artists, playing primarily Hip-Hop, EDM, urban pop, and latin music. The soundtrack was made to provide the perfect urban dance party.note apart from the incongruent "See You Again"

The album debuted at at #12 on Billboard 200, but following the success of the movie, shot up to #1 on the chart. Its biggest success however, was that it produced "See You Again", by Wiz Khalifa featuring Charlie Puth. The song became one of the biggest hits of 2015, shooting up to the top of the charts in a heartbeat, and dethroning Mark Ronson and Bruno Mars' "Uptown Funk!" after 14 weeks, leading to its own length 12 week long chart-topper. The song eclipsed the movie itself, which is no small feat considering Furious 7 made 1.5 billion dollars. "Ride Out" and "Go Hard or Go Home" were also popular, but obviously not to the same extent.

All songs, with the exception of "Whip", make an appearance in the film.

It's been a long day without you my friend, and I'll tell you all about when I trope you again