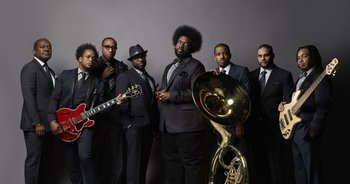 Straight from the town of Philly, y'all!
Advertisement:

The Roots are a long running Conscious Hip Hop group formed in 1987 by Tariq "Black Thought" Trotter and Ahmir "Questlove" Thompson. Unlike most of their peers, who hail either from California, New York, or Georgia, The Roots are from Philadelphia, Pennsylvania.

Unlike many hip hop groups, The Roots are known for their relatively conservative use of sampling, often preferring to use live instrumentation instead. Though they are often labeled Conscious Hip Hop, they've actually dabbled in a wide range of styles. Ranging from Jazz Rap to full on political rap. Lyrically, they're also known to be quite diverse. They typically touch on topics like institutionalized racism, poverty, music industry politics, and in some songs just having a good time.

In addition to making music full time, they have also been the house band for Late Night With Jimmy Fallon since 2009.