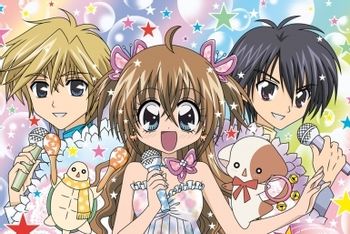 Kirarin Revolution (English: Sparkling Revolution) is a 14 volume manga series by An Nakahara published in the Shōjo magazine Ciao. It was also adapted into a 153 episode anime series in 2006 and became the vehicle for propelling 14-year-old Morning Musume member Koharu Kusumi into stardom.

The story follows a ravenous 14 year old named Kirari Tsukishima, who spends most of her time preoccupied with food and eating. She does not pay much attention to anything else but this. However, things changes when one day when she saves a turtle and ends up meeting a boy named Seiji. As a reward for saving his pet, he gives Kirari a ticket to a concert for the idol band SHIPS. When she tries to go to the concert, though, she meets another boy named Hiroto, who destroys her ticket, telling her to stay away from Seiji because they are two completely different people. When Kirari sneaks into the concert, she find out what he means by this; both Seiji and Hiroto are in the band SHIPS. Determined to win Seiji's love and become part of his world, Kirari begins her quest of becoming an Idol Singer.