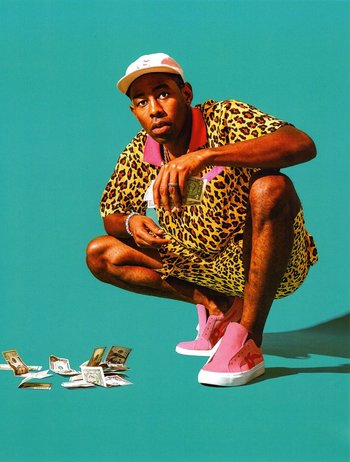 Tyler Gregory Okonma (born March 6, 1991), better known as Tyler, the Creator, is, among other things, an American rapper, singer, fashion designer, and co-founder of the music collective Odd Future.

Tyler's career so far can be split into three notable eras:

Either way, a lot of Tyler's music focuses on his own life, with prominent topics including his missing father and sexual orientation. Each period correlates with Tyler's rising prominence, which was mostly kick-started with the 2011 Breakthrough Hit "Yonkers".

Tyler, the Creator provides examples of:

But at some point, you come to your senses.