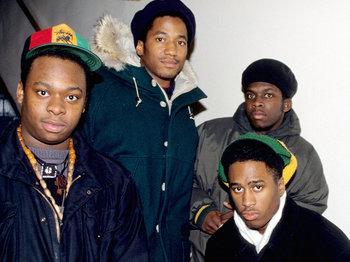 Like A Pimp Named Slickback, you have to say the whole thing.
Advertisement:

A Tribe Called Quest is a Alternative Hip Hop group, formed in 1985. It is composed of rapper/producer Q-Tip (Kamaal Ibn John Fareed, formerly Jonathan Davis), rapper Phife Dawg (Malik Taylor), and DJ/producer Ali Shaheed Muhammad. A fourth member, rapper Jarobi White, left the group after their first album but rejoined the group since 2006. The group is regarded as iconic pioneers of alternative hip hop music, having helped to pave the way for innovative hip-hop artists. Allmusic calls them "the most intelligent, artistic rap group during the 1990s".

Along with De La Soul, Queen Latifah and the Jungle Brothers, the group was a central part of the Native Tongues Posse, and enjoyed the most commercial success out of all the groups to emerge from that collective. Their innovative fusing of hip hop and jazz has had a lasting impact on hip hop music, helping to expand the art of hip hop production. Many of their songs, such as "Bonita Applebum", "Can I Kick It?", "I Left My Wallet in El Segundo", "Scenario", "Check the Rhime", "Jazz (We've Got)", "Award Tour", and "Electric Relaxation" are regarded as classics.

They released five albums in eight years (the first in 1990; the last in 1998), and although the first three LPs were highly acclaimed, the group disbanded in 1998, attributing their split

to record label politics and the changing scene of the hip hop world with the popularity of groups shifting to solo rappers. In 2006, the group reunited, and five years later, a documentary about the group, Beats, Rhymes & Life: The Travels of a Tribe Called Quest, was also made, and it was directed by Michael Rapaport. The group played several shows on Kanye West's Yeezus Tour in 2013 and then stepped out of the spotlight before reuniting again on November 13, 2015 on The Tonight Show in wake of the Paris terrorist attacks. Feeling "charged", they subsequently decided to put aside their differences and secretly record a new album.

Tragedy struck on March 22, 2016 when Phife Dawg died due to complications resulting from his diabetes. Nevertheless, in August 2016, L.A Reid, CEO of Epic Records, announced that a new ATCQ album was coming out, and eventually it was given a set release date. This album (reportedly their final album, according to Q-Tip), We Got It from Here... Thank You 4 Your Service, came out on November 11, 2016. The 16-track double album features not only Phife verses recorded before his death and Jarobi White rhyming for the first time, but many rappers and artists from the past and present such as Kendrick Lamar, André 3000, Kanye West, Elton John, Anderson .Paak, Jack White, Consequence and more. The remaining members of the group played on Saturday Night Live the day after the album released. The album itself is a tribute and dedicated to Phife Dawg.