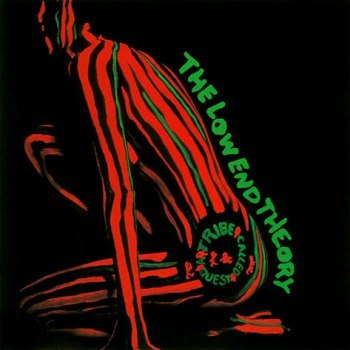 "'Sophomore jinx?' What the fuck is that, I'm going to make The Low End Theory"

— Q-Tip.
It's really hard to top this album. They made other good records, but they never got to this level again. It is from beginning to end a masterpiece. Phife has got a weird midget-DMC energy. And as much as I love Q-Tip, nobody's bigger than the group. He and Phife together are just incredible.
Chris Rock, who placed "The Low End Theory" on nr. 9 in his personal list of the best 25 Hip-Hop albums, published by Rolling Stone in 2004.
Advertisement:

The Low End Theory is the second album by A Tribe Called Quest, released in 1991. The album was groundbreaking in the then-burgeoning style of Jazz Rap. Producers Q-Tip and Ali Shaheed Muhammad employed a minimalist style to their beats, mixing laid-back jazz samples with crisp bass and drum breaks, leaving plenty of room for Q-Tip and fellow MC Phife Dawg to lyrically trade nuggets of wisdom, humor, and social commentary track after track.

The singles "Check the Rhime", "Jazz (We've Got)" and "Scenario" are some of the Tribe’s most well-known songs, as well as some of the most legendary rap songs in general. in 1992, several tracks from the album were remixed, and compiled into the Remix Album Revised Quest For The Seasoned Traveler, which also featured the remixes from their 1991 Europe and Asia-exclusive remix EP People's Instictive Remixes, and a couple B-sides.

Tropes From The Abstract