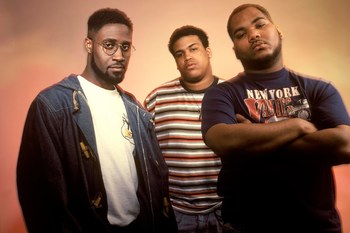 Posdnuos, Dave and Maseo
What I do ain't make-believe
People say I sit and try
But when it comes to being De La
It's just me myself and I
— "Me, Myself and I"
Advertisement:

One of the best known acts in the first wave of Alternative Hip Hop, De La Soul is best known for their eclectic sampling and quirky lyrics. The group consists of Posdnuos, Dave Jude Jolicoeur (formerly Trugoy) and Maseo. They were also heavily associated with producer Prince Paul (also known for his work with Handsome Boy Modeling School and Gravediggaz).

Upon release of their debut album, 3 Feet High and Rising in 1989, the group was frequently called "hippies" due to the fact that the lyrics often talked about peace and love, the album cover featured daisies, and their clothing wasn't exactly in line with the usual stereotypical Hip-Hop gear. However, the group specifically stated that they are not hippies in the lyrics to their single, "Me Myself and I", which they performed on The Arsenio Hall Show...immediately after Arsenio introduced De La Soul as "the hippies of hip hop", indicating that he never listened to their music. Further adding to the disrespect, the credits for the show ran over the performance before the group was finished.

Also, their sampling got them into some hot water - Mark Volman and Howard Kaylan of The Turtles and The Mothers Of Invention sued De La Soul over an uncredited sample of the Turtles song "You Showed Me" in De La Soul's interlude "Transmitting Live from Mars" and were later given credit for the sample. Volman and Kaylan later explained that they like samples, as long as they receive credit for the original recording.

Following continuing frustration over being called hippies, De La Soul released a Darker and Edgier album, De La Soul Is Dead, featuring an album cover depicting a broken pot of daisies. The album's sketches formed a storyline that was essentially a Take That! towards Gangsta Rap, where the group expressed frustration over the fact that they were overlooked because they didn't embody Hardcore Hip Hop stereotypes by portraying a group of bullies listening to De La Soul Is Dead and mocking the group because they didn't rap about guns, violence and gang life. This storyline is presented as a "read along storybook", and much like their debut, featured a comic strip in the booklet. In sharp contrast to Hardcore and Gangsta lyrical themes, De La Soul Is Dead took a conscious approach to inner city life, such as on "Millie Pulled a Pistol on Santa" (which is about a girl who shoots her father while he is working as a Mall Santa, because he sexually molests her and no one believes her) and "My Brother's a Basehead" (which is about Posdnuos' brother, who is a crack addictnote a "basehead" is what they used to call a "crackhead" back when the crack epidemic was a big deal in the 1980s. The "base" part comes from the verb "freebase," which means to smoke crack by putting a crack rock over a heated spoon and inhaling the fumes).

De La Soul continued to experiment with Jazz fusion on Buhloone Mindstate and featured a guest spot by Japanese rappers Scha Dara Parr. Chris Rock listed this album as the 10th best hip hop album of all time, out of 25 listed for a Rolling Stone article. This was the last De La Soul album produced by Prince Paul. Without Paul, they continued to release albums, including Stakes Is High and The Grind Date. They've also collaborated with Gorillaz on their singles "Feel Good Inc" and "Superfast Jellyfish", and with the Alternative Rock band Teenage Fanclub, they contributed to the Rap Rock-based Judgment Night soundtrack.

Thanks, and good night... for 3 Feet High And Rising, this is Don Newkirk.