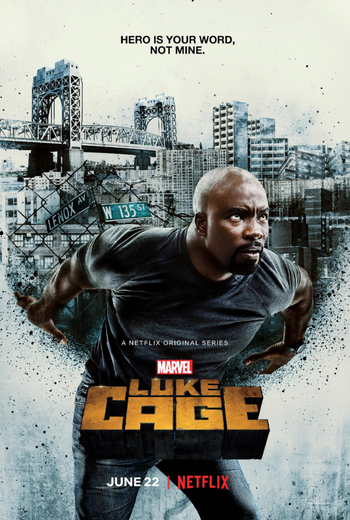 "So you can take it from a bulletproof thug: the hood got his back, dawg, bulletproof love."
"This city is supposed to represent our hopes and dreams. You have to fight for what's right every single day."
— Luke Cage
Advertisement:

Luke Cage is an original series adaptation of the Marvel comic book property Luke Cage: Hero for Hire released on September 30th, 2016, developed by Cheo Hodari Coker. It is the third entry in the Marvel Cinematic Universe's The Defenders (2017) original series franchise, after Daredevil (2015) and Jessica Jones (2015), and preceding Iron Fist. The series originally premiered on Netflix in 2016.

The show stars Mike Colter as Luke Cage, a bartender from New York City who gained Super Strength and Nigh-Invulnerable skin from an experiment to save his life turned murder attempt. After the resulting explosion gives him the chance to change his life, he goes on the lam, hoping to live out his life as a normal person in Harlem. When Luke's past begins to catch up with him, he finds himself at war against the gangs that control organized crime in Harlem, which are led by Cornell "Cottonmouth" Stokes (Mahershala Ali), Madame Councilwoman Mariah Dillard* STOKES, Mariah Stokes (Alfre Woodard), Hernan "Shades" Alvarez (Theo Rossi) and Willis "Diamondback" Stryker (Erik LaRay Harvey), while also being at odds with Detective Misty Knight (Simone Missick).

A second season was released

on June 22, 2018. A year after the events of season 1, Luke has become a celebrity on the streets of Harlem with a reputation as bulletproof as his skin, and Mariah is preparing to retire from the criminal business. But when John "Bushmaster" McIver (Mustafa Shakir) shows up to exact war on Mariah over a past family grudge, Luke is forced to confront the fine line that separates a hero from a villain. Season 2 also adds Gabrielle Dennis as Mariah's daughter Matilda "Tilda" Johnson, and Reg E. Cathey as Reverend James Lucas in what was his final role prior to his death at the age of 59. In October 2018, Netflix announced that it was canceling the series due to creative differences. In February 2022, the series, alongside the rest of the Defenders franchise, exited Netflix's platform, moving to Disney+ the next month.

As Luke Cage is part of The Defenders, spoilers from that series are included in some of the examples, and they are marked as such.

After being put through an experiment, Luke Cage was given super strength and indestructible skin.

After being put through an experiment, Luke Cage was given super strength and indestructible skin.