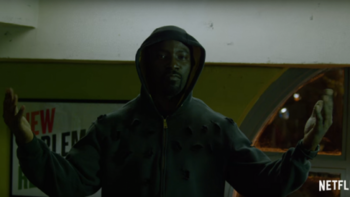 There's something powerful about a Black man who's Bulletproof and unafraid.
Advertisement:
open/close all folders

Episode 1: Moment of Truth
Episode 2: Code of the Streets
Episode 3: Who's Gonna Take The Weight?
Advertisement:
Episode 4: Step In The Arena
Episode 5: Just to Get a Rep
Episode 6: Suckas Need Bodyguards
Episode 7: Manifest
Episode 8: Blowin' Up the Spot
Advertisement:
Episode 9: DWYCK
Episode 10: Take It Personal
Episode 11: Now You're Mine
Episode 12: Soliloquy of Chaos
Episode 13: You Know My Steez