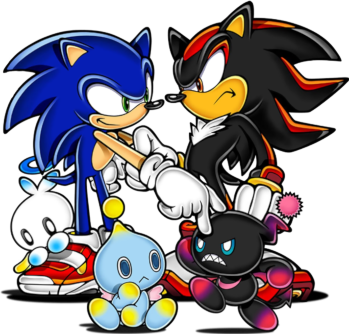 A blue hedgehog and his Evil Counterpart, taking their pet Chao out for a play-date.
Advertisement:

Sentient creatures, particularly magical ones, will take on the personality and/or trappings of their master. Good magical creatures will be brightly colored and soft-shaped. Evil magical creatures will be pointy shaped and darkly colored, sporting horns and/or fangs. If the creature switches sides from one to the other, the appearance will change accordingly. In short, if it looks evil, it is evil, and vice-versa.

The good/evil transition is not entirely confined to magical creatures in service. Sometimes it's a visual shorthand for the fact that a character has shaken off evil or selfish inclinations to become a good or better person; or has given in to darker impulses and gone evil.

This Personal Appearance Trope is the Sister Trope of Fisher King, where the land reflects the stylistic mien of its ruler, and that trope that indicates pets look just like their owners.

Compare and contrast Evil Makeover, Monster of the Aesop, Beauty Equals Goodness; Face of an Angel, Mind of a Demon; Astonishingly Appropriate Appearance and Personality Powers, which go closely with this trope. For creatures whose appearance changes to match their own personality and emotions, see Living Mood Ring.