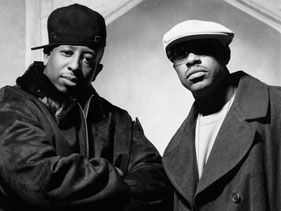 Gang Starr actually got their start in 1985. At this time, DJ Premier (then known as Waxmaster C) was not part of the group; instead, Guru founded it with DJ 1, 2 B-Down. In 1987 and '88, they released three singles on vinyl, one of which was called "The Lesson", on a label called Wild Pitch Records. The group finally split in 1989, though, and the only one left that carried its name was Guru.

However, that same year he got in contact with DJ Premier, who sent him a beat tape. He liked it so much, he invited Premier to be part of Gang Starr. He accepted.

Along with a new single, "Words I Manifest", the duo released their debut album No More Mr. Nice Guy. The next year, a former DJ, Duff Marlowe, signed them to Chrysalis Records. The album (and subsequent albums) popularized the usage of jazz samples in hip-hop throughout the early-mid '90s, effectively creating what is known as Jazz Rap.

Somewhere between Daily Operation and Hard to Earn, they created the Gang Starr Foundation, which isn't a rap group per se, but a group of individual rappers the duo liked and wanted to sign. Its initial lineup was Jeru the Damaja, Big Shug, Lil Dap, and Melachi the Nutcrackernote the latter two would later become a rap duo called Group Home.

Also during this time. Guru began his Jazzmatazz series of albums, taking the "Jazz Rap" tag to its logical conclusion by working with jazz musicians and singers to create a true blend of jazz and hip-hop.

After a four-year gap, the duo finally released their fifth album, Moment Of Truth. Around the time the album was being made, Guru was charged with gun possession. The album is somewhat centered around this. note "JFK 2 LAX" is about Guru's incarceration, before "Moment of Truth" starts, a few voicemails from Guru's friends wishing him the best of luck are played, and the second verse of that song describes his feelings while waiting to be tried.

Gang Starr disbanded in 2003 after their last album The Ownerz. It's said that the two had a falling out, causing Guru to leave the duo. He continued to release solo albums after this.

In 2010, Guru died of heart cancer, shaking the hip-hop community to its foundations. DJ Premier did a tribute mix on his radio show called Live at Headquarterz in his honor.

These days, Premier, aside from hosting the aforementioned radio show, continues to produce for underground rap artists from all over the world, occasionally goes on tours (globally, even. He's played shows in Paris, Athens, and Osaka), and heads an underground label called Year Round Records. He has also started a collaboration project with Royce Da 5'9" called PRhyme. Do not compare them to Gang Starr, as Royce will have you know he does not intend to replace Guru.

In 2019, pigs flew, and a new Gang Starr single dropped out of nowhere: Family & Loyalty

, featuring J. Cole. Even more shocking was the announcement of a brand new album from the duo: One Of The Best Yet, the group's first new album in nearly two decades, featuring unreleased vocals from Guru, a bevy of special guests, and new beats from Premier.

Not to be confused with the 1980s cartoon Bravestarr.