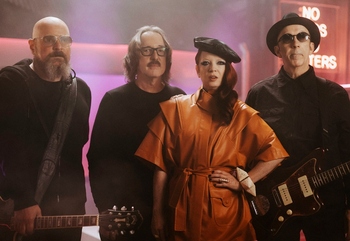 Garbage was formed in 1994 by Record Producer Butch Vig, noted for his work with famous alternative rock acts like Nirvana (Nevermind), Sonic Youth, The Smashing Pumpkins and L7. Vig took up the position of drummer and brought in some old bandmates and fellow producers, guitarist/keyboardist Steve Marker and bassist Duke Erikson. The lineup was completed with the recruitment of Scottish vocalist Shirley Manson, formerly of alt-rock bands Angelfish and Goodbye Mr. Mackenzie. Their bandname comes from somebody commenting that Vig's remix work sounded "like garbage", a quote frequently attributed to Trent Reznor for some reason.note He did call his contribution to the Fixed Remix EP garbage, but that was less of hatred for his song in particular and more because of his hatred for the project in general.

After gaining a bit of attention through demo tapes, the band signed to Mushroom Records and began to work on their debut, the self-produced Garbage. Released in 1995, its hybrid electronic-alternative-industrial-rock sound was favourably received and quickly gained a large audience, managing to come up with a few hits in the process such as the Stealth Parody (or open parody, really) of grunge angst "Only Happy When It Rains", "Vow" and the Clash-sampling "Stupid Girl" (not the P!nk song, though lyrically similar).

For their follow-up, Version 2.0, Garbage continued with the same electro-rock sound but added a denser production, more techno and trip-hop influences and catchier melodies. 2.0 became another well-received success and gave them a few more hit singles as well, such as the technoey "Push It", the super-heavy Epic Riff-driven "I Think I'm Paranoid", and the ballad "You Look So Fine". Around this time, they were recruited to perform the theme to The World Is Not Enough, on which they worked alongside composer David Arnold.

The band's gravy train slowed down somewhat after The '90s ended, thanks to record label problems and a mixed reception for beautifulgarbage that frequently included charges of both They Changed It, Now It Sucks! and It's the Same, Now It Sucks! — a reception that translated into poor sales. During the Troubled Production of their next album, they nearly broke up due to intra-band tensions in 2003, but managed to regroup and finish Bleed Like Me in 2005, which once again suffered a mixed reception but did slightly better in the charts. They went on a hiatus for five years afterwards, during which time Manson played a regular dramatic role as the liquid metal Terminator known as Weaver in Terminator: The Sarah Connor Chronicles. Despite generally positive reactions, she didn't continue with acting. Manson announced in October of 2010 that the group had reformed and was working on a fifth album, which was released in 2012 as Not Your Kind of People. The title track was used in the trailer for Metal Gear Solid V, so the group has at least one Japanese fan. Strange Little Birds followed in 2016 followed by No Gods No Masters in 2021 (Manson admits that they’re not the fastest creators in the business).