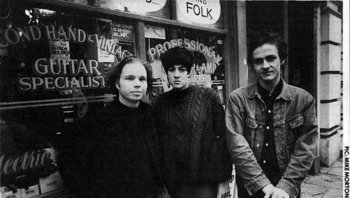 Galaxie 500 were a short-lived yet very influential Dream Pop band with elements of Shoegazing.

Throughout their existence the band's members were:

The band was formed by the three while they were studying at Harvard in 1987, and named themselves after a friend who owned a Ford Galaxie 500. During this period, Krukowski lacked a permanent drumkit and instead borrowed one from his classmate Conan O'Brien.

They signed with the Shimmy Disc label in 1988, where they proceeded to release one album per year: Today, On Fire and This Is Our Music. These showcased the band's simple Dream Pop compositions argumented by Mark Kramer's psychedelic production and earned them some critical acclaim and a loyal audience. They, American Music Club, and Codeine are considered important influences on the Slowcore subgenre.

The band disintegrated in 1991 when Wareham moved back to New York City and informed Yang and Krukowski that he was quitting. Wareham subsequently founded the bands Luna and Dean & Britta (with his wife Britta Phillips), and Damon and Naomi founded the band Damon And Naomi.