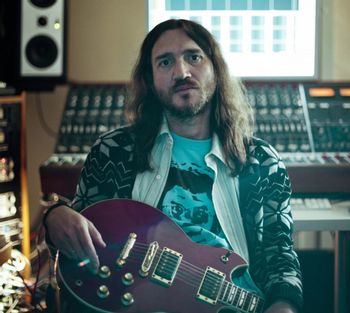 John Anthony Frusciante (born March 5, 1970) is an American musician, best known for being the most famous guitarist of Red Hot Chili Peppers (from 1988-1992, then from 1998-2009 and from 2019 onwards). His solo work is markedly distinct from that of the band's, for it's extremely experimental, psychedelic, and acoustic. In recent years, he has moved into terrains of electronica, synthpop, and acid house. While initially introverted in his younger days, he has since opened up and begun an immensely prolific career and collaborated with a wide variety of artists, while remaining both humble and spiritual.

His career began when he joined the Chili Peppers in 1988, at the tender age of 18, following the death of guitarist Hillel Slovak and the departure of drummer Jack Irons. From 1988 to 1992, he recorded two albums with the band: Mother's Milk and Blood Sugar Sex Magik. The latter is considered to be the band's breakout album and propelled its four members to the mainstream, thanks to chart-topping singles such as "Give It Away" and "Under the Bridge"... much to the displeasure of the young guitarist.

Frusciante became disillusioned with the continual pressures of constantly being under the spotlight and in the public eye. He began abusing marijuana, and he became unconcerned with his band members and their future. In 1992, he quit the band mid-tour, and, having entered a deep depression, became dependent on heroin while producing tracks that he created during his time with the Chilis. He released his first solo album, Niandra Lades & Usually Just A T-Shirt, in 1994.

He gave a few interviews to promote the album, but wound up revealing just how bad his condition was: he lost a ton of weight, his teeth decayed, he had dark circles under his eyes, and came severely close to overdosing ‒ twice. He even burned down his house by accident and lost many of his guitars and tapes. A Dutch broadcasting company, VPRO, filmed a documentary about him, most of which can be seen here

. Johnny Depp and Gibby Haynes even made a short film about the squalor in which he lived.

His second solo album, Smile from the Streets You Hold, was released in 1997, initially under the intention to support his drug addiction. However, he decided to check into rehab that same year and quit drugs and sex cold turkey. Frusciante began immersing himself in yoga, eating healthily, and dedicating himself to self-discipline. He underwent massive jaw surgery as well and needed extensive skin grafts, because of his numerous infections and improper drug usage. He then reconciled with Anthony Kiedis, Flea, and Chad Smith, his former band members, and rejoined the Chili Peppers in 1998. The reunited band released its internationally-acclaimed seventh album, Californication, in 1999, and the guitarist has since been healthy and happier than ever before.

But his solo career didn't stop there. In 2001, Frusciante released his third solo album, To Record Only Water For Ten Days, along with his fourth album, From the Sounds Inside, under the insistence of his Internet fanbase. He became much more prolific during this era, producing dozens of songs even while constantly touring and producing new songs with the Chili Peppers. In 2004, Frusciante released five distinct solo albums, an EP, and the soundtrack for the film The Brown Bunny. Frusciante collaborated frequently with a young guitarist named Josh Klinghoffer, who even co-wrote his eighth album A Sphere in the Heart of Silence, and established a close friendship with him.

In 2009, he released his tenth album, The Empyrean. After having recorded two more albums with the Chilis (2002's By the Way and 2006's Stadium Arcadium), he decided to quit the Chili Peppers that year for a second time, this time on good terms with the rest of the members. The band replaced him with Klinghoffer (the logical step, given their similarities).

Frusciante has since released two more studio albums and three more EPs, both under his own name and his alias "Trickfinger". In 2011, he married Nicole Turley, of Swahili Blonde and Kimono Kult fame, and plays the guitar for his wife's various projects. He has contributed guitar work on almost every The Mars Volta album and even collaborated with its guitarist, Omar Rodríguez-López, on a few of the latter's solo albums. He has recorded albums with temporary bands such as Ataxia and Speed Dealer Moms and he has produced a few albums for Wu-Tang Clan affiliates Black Knights, and has been associated with older acts such as Duran Duran, Fishbone, and Johnny Cash. He no longer likes to perform live, preferring instead to spend his time in recording studios.

In 2012, he was inducted into the Rock and Roll Hall of Fame along with the rest of the Red Hot Chili Peppers, but didn't attend the ceremony to accept his award because he wanted to move on from the band and concentrate on his work. Indeed, John Frusciante has certainly left a considerable influence on the music industry, both spiritually and through his technique, and continues to forge new paths to expand and diversify his work...at least, until he decided to rejoin Red Hot Chili Peppers in 2019.