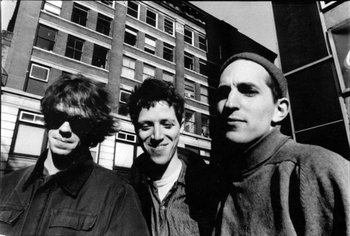 The Godfathers of Slowcore.

Codeine is an indie rock band from New York City formed in 1989. The band was known for its super slow and depressing music. They released two albums, Frigid Stars LP and The White Birch as well as a critically acclaimed EP, Barely Real. They split in 1994 and announced a reunion in 2012.

Unlike a lot of slowcore bands which focused on acoustic instrumentation like Low or the Dream Pop-like atmospheres created by Red House Painters, Codeine had a much more experimental nature. They had loud, ringing guitars, nasal-sharp vocals and ultra-depressing lyrics. Their style sounds much more reminiscent of early Post-Rock bands like Slint.

While they are considered the first slowcore band, the Trope Codifier is actually Red House Painters to the point where the band ended up influencing Codeine more than Codeine influenced them. Mark Kozelek, RHP's lead singer actually stated in interviews that he was mostly unaware of Codeine's existence until a few years into the band's existence and said the band had little influence on them. Therefore Slowcore more RHP based tends to get labeled as "sadcore" due to the more emotional nature of the music, while "true slowcore" sounds more Codeine-like.