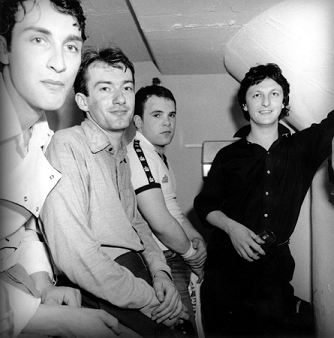 Gang of Four were a British Post-Punk band and one of the Trope Makers of Dance-Punk. They combined Funk rhythms, jagged guitars and simple bass lines with a heavy emphasis on politics and a sardonic approach to love and sex. While never big in the charts, their mix of Punk Rock, Funk, and Dub Reggae has been influential since their debut in 1979. Bands from Franz Ferdinand to Red Hot Chili Peppers cite them as an influence.

The classic lineup contained Jon King on vocals, Andy Gill on guitars and backing vocals, Dave Allen on bass, and Hugo Burnham on drums. The band dissolved and reformed multiple times, transitioning their style from Post-Punk Dance-Punk to New Wave Music, Dance Rock, and back to Post-Punk with their revival in the Turn of the Millennium.

his death that same day via Twitter. It appeared to be the end of the band-until King and Burnham announced another reunion in October 2021.

Not to be confused with the 1960s Chinese Communist group from whom the band take their name.

Love Will Get You Like a Case of Tropes: