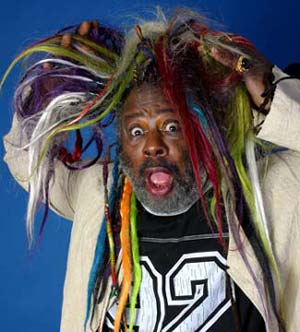 "There's a good time waiting for you, come on and let's get free!"
— Funkadelic, "Good To Your Earhole"
"Make my funk the P-Funk, I wants to get funked up
I want the bomb, I want the P-Funk, I want my funk uncut."
— Parliament, "P-Funk (Wants to Get Funked Up)"
Advertisement:

George Edward Clinton (born July 22, 1941) is a famous and acclaimed Funk musician. If James Brown was the pioneer of funk, George Clinton is the man who arguably fulfilled its potential as the driving force of Parliament-Funkadelic. He is known foremost for his conceptual vision, socially conscious lyrics and production skills. The bands themselves are famous for their excellent musicianship, fierce live performances and outlandish albums boasting satirical comic-book artwork, its most famous covers being the ones drawn by Pedro Bell and Overton Loyd. Besides being considered a member of funk's "holy trinity" (alongside James Brown and Sly and the Family Stone), he's also the second or third most sampled musician, depending on who's counting. He was inducted into the Rock & Roll Hall of Fame in 1997 as a member of Parliament-Funkadelic.

George Clinton was born in 1941 in Kannapolis, North Carolina (near Charlotte) and grew up in Plainfield, New Jersey. After some time in a barber salon, he became a staff songwriter for Motown, while fronting a small-time Doo-wop group named The Parliaments, which had a hit in 1967 with "(I Wanna) Testify". But this band disintegrated, and Clinton instead formed Funkadelic, a band which played a combination of psychedelic rock and funk, influenced by other famous musicians such as Jimi Hendrix, James Brown and Sly & the Family Stone.

Signed with Westbound Records, they released several records starting in 1970 and gained a small following. The same year, Clinton decided to expand with an off-shoot group named Parliament, which featured most of the musicians from Funkadelic, and originally covered much of the same musical ground before both groups moved away from psychedelic rock and became more funk-oriented. More spinoffs, including The Brides of Funkenstein followed. And later, Bootsy Collins started his own career with Bootsy's Rubber Band.

1975–79 is widely considered Parliament-Funkadelic's "classic" period, when they released a string of concept albums full of bizarre spacey imagery and their own mythology

, which were critically acclaimed and commercially successful, backed by an elaborate stage show that rivaled Pink Floyd. The same period resulted in a stream of side-projects and more off-shoots, out of which only Bootsy's Rubber Band earned any comparable success or visibility.

The P-Funk collective began disintegrating at the start of the 1980s as a result of Clinton's drug problems and financial problems stemming from the two groups' unwieldy size. They were disbanded as a result of complicated label politics, and Clinton started a solo career, gaining a 1982 hit album in Computer Games and the #1 single "Atomic Dog". He has continued to tour and record since with many of the same musicians under the name "P-Funk All Stars", largely due to legal issues preventing him from using "Parliament" or "Funkadelic" after 1980. The "P-Funk All Stars" nowadays contain both old P-Funk standbys and new musicians.

Not to be confused with Bill Clinton (The Onion ran quite a few stories during The '90s that played on the similarity), vice president George Clinton

Had an appearance As Himself in PCU.

The most famous songs recorded by the collective include:

An almost certainly unfinished list of all the personnel who were part of the Parliament-Funkadelic collective and offshoots throughout its history:

The P-Funk collective provides examples of the following tropes:

The P-Funk mythology provides examples of: