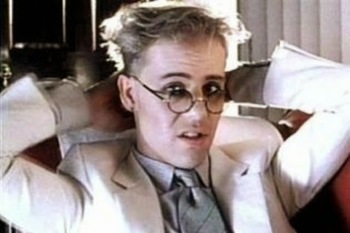 He was born Thomas Morgan Robertson on 14 October 1958. His father, Martin Robertson, was an internationally distinguished professor of classical Greek art and archeology at the University of London and Oxford University, and in his youth Thomas lived or worked in France, Italy and Greece. He attended Abingdon School in 1975-76, completing his A Levels whilst there. He later married actress Kathleen Beller in 1988; the couple have three children together. He is best known for his 1982 hit "She Blinded Me with Science", and 1984 single "Hyperactive!", his Steampunk aesthetic, his eclectic musical style, and his ability with electronic instruments. And his goggles. He has also worked extensively in production and as a session musician. He took his stage name from a nickname his friends gave him in the 1970s, for his habit of fooling with keyboards and recording tapes.

Dolby is member #00001 of the current incarnation of the Flat Earth Society, a pseudoscientific group.note He was offered the membership by the founder due to his album The Flat Earth, and for a time opened his concerts with a tongue-in-cheek They Called Me Mad!-variety lecture on the subject. His best known song came from the album The Golden Age of Wireless (1982), frequently re-released and revision with varying tracks available - it was released five times, in fact! He has produced a variety of albums since then, along with video games based on his steampunk settings.

Thomas Dolby has also worked as a producer and a soundtrack composer for both films and video games, most notably "The Gate To The Mind's Eye", the third installment of the CGI collection, The Mind's Eye. Dolby also wrote the songs for the 1986 George Lucas film Howard the Duck and chose the members of the film's fictional band, Cherry Bomb. Dolby wrote and produced three tracks for the 1992 soundtrack of the animated movie FernGully: The Last Rainforest. He also created the score for the 1993 Sega CD interactive movie "Double Switch". Additionally, the song "Hyperactive!" is featured in the 2002 PlayStation 2 videogame Grand Theft Auto: Vice City as part of the New Wave radio station Wave 103.

In 1990 Dolby played (or perhaps overplayed) the role of the villain Stanley in the cult film Rockula, as well as contributing the songs "Stanley's Death Park" and "Budapest by Blimp". In 1993, Dolby successfully established the Headspace company. Headspace developed a new downloadable file format designed specifically for Internet usage called Rich Music Format with the RMF file extension. It had the advantage of small file size like MIDI, but allowed recorded sampled sounds to be included at a higher bitrate for better overall reproduction. RMF music files could be played in a browser using the free Beatnik Player plug-in. Later versions of RMF permitted artists to place an encrypted watermark in their files that were supposed to prevent unauthorized duplication. In 1999, Headspace, Inc. was renamed Beatnik, Inc., and now specializes in software synthesizers for mobile phones, which it has licensed to mobile phone manufacturers including Nokia.

While still remaining on the company board, Dolby stepped down from his position as CEO of Beatnik Inc. to pursue other technologically innovative interests, such as founding Retro Ringtones LLC in 2002, which produces the RetroFolio ringtone asset management software suite for companies involved in the mobile phone ringtone business. At the second annual Mobile Music Awards, Miami, Florida, in 2004 Retro Folio won "Best of Show" and "Best New Technology" awards.

Dolby's musical talents have also been put to use creating hundreds of digital polyphonic ringtones now found on mobile phones everywhere (including the polyphonic version of the infamous Nokia signature theme). He is often a major speaker at technology conferences such as Comdex, Websphere, and Nokia. Starting in 2013, he became the Professor of the Arts at Johns Hopkins University.

Dolby has also been a frequent collaborator with George Clinton.