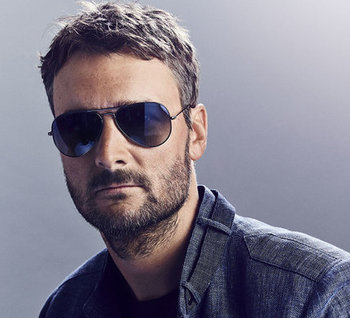 Kenneth Eric Church (born May 3, 1977) is a Country Music singer and songwriter. Originally known as the guy whose errors gave Taylor Swift her big break - he couldn't shorten his set as the opening act on a Rascal Flatts tour - Church has subsequently exploded as a live act in his own right, mixing his story-songs with a hard rocking style owing to Black Sabbath as much as Waylon Jennings.
Advertisement:

He first got his foot in the door in late 2004-early 2005 as a co-writer on Terri Clark's "The World Needs a Drink". Although it took him until his third album to score a major hit, Church kept plugging away, building a fanbase and touring frequently. Radio finally granted him a first #1 in early 2012 with "Drink in My Hand", then followed that up with the summertime smash "Springsteen". His fourth album, The Outsiders, followed in 2014, and it has generated further hits in "Give Me Back My Hometown" and "Talladega". From Mr. Misunderstood came "Record Year" and "Round Here Buzz".