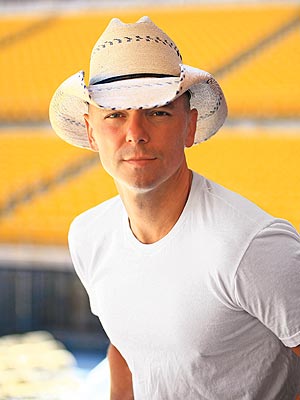 Kenneth Arnold "Kenny" Chesney (born March 26, 1968) began performing in his teenage years, before working at clubs before signing a deal with Capricorn Records in 1993. Capricorn had no experience in the country music field, however; the album received minimal promotion, its singles tanked, and the label closed its Nashville branch.

He then got picked up by BNA Records, a country music division of RCA Records, and issued his breakthrough album All I Need to Know in 1995. Although it wasn't until 1997 that he finally scored a Number One hit, most of his BNA singles in this timespan reached Top 10 or better. Kicking his career into high gear, he scored a six-week #1 in 1999 with "Don't Happen Twice." A Greatest Hits Album in 2000 produced one of his Signature Songs, "She Thinks My Tractor's Sexy."

No Shirt, No Shoes, No Problems and When the Sun Goes Down, in 2002 and 2004 respectively, marked a shift in Chesney's sound more towards a combination of eighties rock influences and acoustic songs, quite often about the beach. Along the way, he had the biggest country hit of 2002 with "The Good Stuff," a seven-week chart-topper. This sound, and continued commercial success, followed through the next albums in the batch: The Road and the Radio in 2005 and Just Who I Am: Poets & Pirates in 2007. Lucky Old Sun, strangely, produced only two hits, although one was later released as a single from his second Greatest Hits package. His next album, Hemingway's Whiskey, was released late in 2010.

Following the closure of BNA in 2012, Chesney has moved to Columbia Records' Nashville division. He moved again to Warner (Bros.) Records in January 2018.

For the first stretch of his career up to the Turn of the Millennium, Chesney was of a decidedly more "mainstream" bent, delivering slick, twangy honky-tonk country. Starting with No Shoes, No Shirt, No Problems in 2002, he dialed back on the twang somewhat and began recording a blend of arena rock, upbeat "beachy" tunes clearly inspired from Jimmy Buffett, and soft introspective ballads. His albums since this point have drawn from a mix of acclaimed yet largely obscure sources, including Mac McAnally, Matraca Berg, Charlie Robison, and Mindy Smith. He has also drawn many non-country names into his material, such as The Wailers, Dave Matthews, Grace Potter (of Grace Potter and the Nocturnals), Ziggy Marley, and P!nk.

Chesney was briefly a tabloid target in 2005 after his short-lived marriage to actress Renée Zellweger.