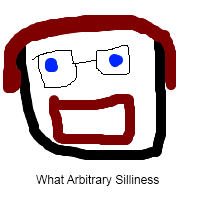 50% Hero, 50% Idiot
What Arbitrary Silliness is a short, random but dark comedy 4 panel comic based on the real life adventures of two boys, Joshua and Daniel that was first published 20/10/2012, with 10 issues uploaded onto the work's tumblr page. What Arbitrary Silliness aims to plagiarise nearly everything the creator can get his hands on. The author has confirmed it will be a 36 issue series split into 3 volumes, with the first volume being named Days Gone Bye. The story itself has no apparent continuity, but in several cases (notably the last four issues posted) the two boys have the same clothing after the PS3 incident. The comic can be found hereWhat Arbitrary Silliness contains examples of...