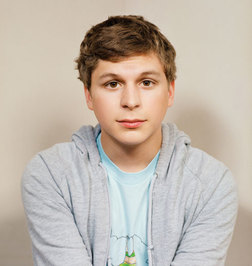 Michael Austin Cera (born on June 7, 1988 in Brampton, Ontario) is a Canadian actor.

His career started in Canadian children's TV doing voiceover work for cartoons as well as live-action comedies. His first major role in the U.S. was in the hit comedic show Arrested Development. From there, Cera's career began to skyrocket, as Hollywood realized this guy was good at playing characters with an almost Charlie Brown-esque tone to them, and as the saying goes, "que Cera, Cera."

As a side note, he apparently liked the fight training he went through to prepare for Scott Pilgrim vs. The World so much that he's now studying martial arts for real. You have been warned.