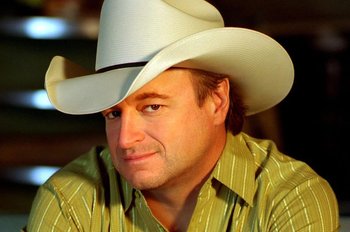 Country Music singer who broke through in The '90s as part of the "neotraditionalist" movement, bringing a twangy honky-tonk sound with a modern edge.

A native of Beaumont, Texas, Mark Nelson Chesnutt (born September 6, 1963) broke through in 1990 with his debut album Too Cold at Home on MCA Records. The album produced five Top 10 hits and sold platinum, a sales figure matched by his next two discs as well. His first 12 singles all made Top 10, as did 8 more by decade's end. Starting with his 1994 album What a Way to Live, MCA moved him to Decca Records, which it had reactivated as a country label.

Chesnutt's discography is dominated by a twangy fiddle-and-steel sound, indebted to honky-tonk music of old, and codified by covers of Keith Whitley, Waylon Jennings, and Hank Williams Jr.... so it should probably come as a shock that his biggest hit came at the end of the decade with a cover of Aerosmith's "I Don't Want to Miss a Thing", a song supposedly forced upon him by the label. After Decca was reformatted in the late 1990s, he moved to MCA Nashville and then to Columbia Records for one unsuccessful album each. All of his subsequent releases have been on smaller independent labels, and while his radio days are long past, he has continued to maintain a twangy and traditionally-influenced sound.