Western Animation / Robin and the Dreamweavers 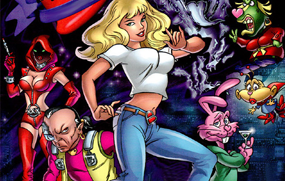 You got your Cool World in my Cyberseduction!
Advertisement:

Ten years after Filmation disbanded, Lou Scheimer was approached by a Dutch investment company called Dreamweavers, N.V. to produce an animated series for young adults based on "an off-kilter Dutchman's renderings" of bizarre cartoon characters. There were plans for an ambitious franchise that would include the series, movies, music albums, and even a clothing line, but all that came out of it was a Pilot Movie for the series.