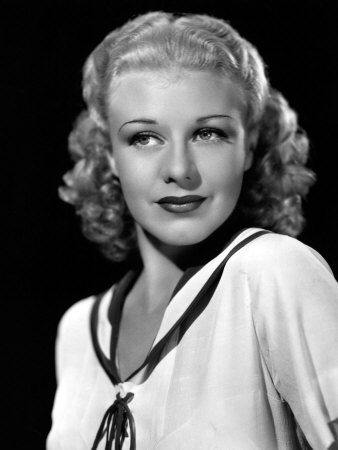 "Sure, [Fred Astaire] was great, but don't forget Ginger Rogers did everything he did backwards... and in high heels!"note Although the high heels part is accurate, it has to be noted that usually both of them spent equal amounts of time dancing backwards and forwards in a typical routine.
— Frank and Ernest, 1982

◊
"Ginger had never danced with a partner before Flying Down to Rio. She faked it an awful lot. She couldn't tap and she couldn't do this and that ... but Ginger had style and talent and improved as she went along. She got so that after a while everyone else who danced with me looked wrong."
— Fred Astaire
Advertisement:

Ginger Rogers, born Virginia Katherine McMath (July 16, 1911 – April 25, 1995) was an American actress, singer and dancer who appeared in a lot of films (a total of seventy-three), television and stage shows over her career but is mostly remembered for her musical films — particularly the ten films she did with Fred Astaire, where she co-starred as his Love Interest.

Rogers was born in Independence, Missouri and raised in Fort Worth, Texas. After winning a dance competition, she made her way through stage musicals and landed herself numerous film roles in 1929 and eventually partnered up with Fred Astaire in 1933, creating some of the most beautiful dance routines ever filmed and, with him, revolutionizing the genre. With the above quote from the Frank and Ernest comic strip becoming a popular meme, Rogers gained a popular reputation of being perhaps even more skilled a dancer than Astaire with the aforementioned handicaps in her performance.

Went through Tom Hanks Syndrome in The '40s as she left both musicals and Astaire behind and became a leading lady, although her dance movies and musicals still ended up better remembered.

She was ranked the fourteenth greatest female movie star of all time by the American Film Institute.

Some of her Filmography: