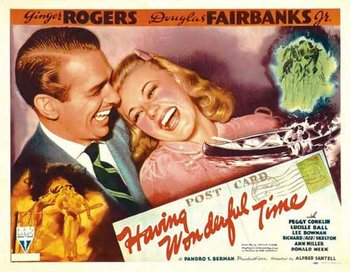 Having Wonderful Time is a 1938 Romantic Comedy film directed by Alfred Santell, based on the stage play of the same name by Arthur Kober.

Thelma "Teddy" Shaw (Ginger Rogers), a young secretary in New York, goes off to "Camp Kare-Free", a vacation resort somewhere in the mountains. She is vaguely disenchanted with the resort (a "semi-private cabin" means she has three roommates) and her two weeks off starts with her getting into a nasty little argument with Chick (Douglas Fairbanks Jr.), a porter/waiter at the resort.

Chick, as it turns out, has a law degree but for some reason has had to settle for a job as a waiter at a tourist resort. His dissatisfaction with his lot in life results in sniping with Teddy—but naturally, romantic sparks fly.

Lucille Ball plays one of the comic supporting roles that were her specialty at this stage in her career, namely Miriam, another guest at the resort who is unapologetically hunting for a man. A pre-stardom, 15-year-old Ann Miller has a bit part as a camp guest.