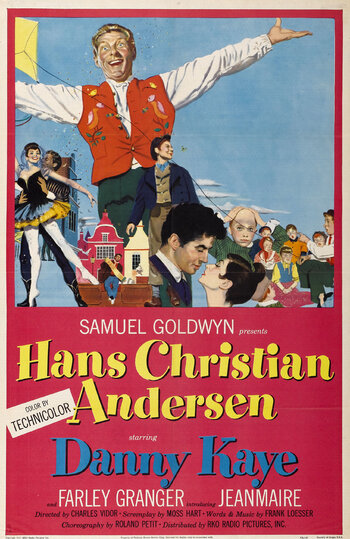 Hans Christian Andersen is a 1952 musical film loosely based on the life of, yes, Hans Christian Andersen, directed by Charles Vidor and starring Danny Kaye in the title role along with Farley Granger, Zizi Jeanmaire, and songs by Frank Loesser. As the Opening Scroll states above, the takes many liberties with Andersen's story and crafts its own version of how he became the famed writer he is now.

In Odense, Denmark in the 1830s, Andersen — who's constantly in trouble for telling fanciful (yet educational) stories to the village children — is forced to leave and takes his apprentice to Copenhagen, where he falls in love with a ballerina.