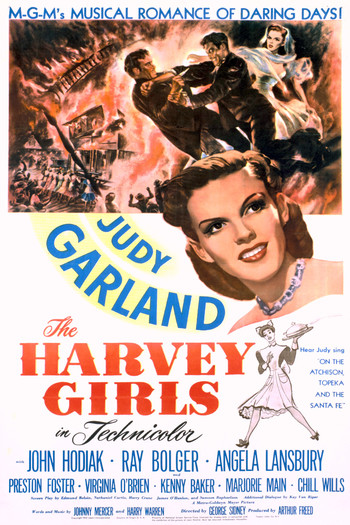 "I don't know whether we're The Three Musketeers or the Three Blind Mice..."
— Susan Bradley
Advertisement:

Released in 1946, this MGM Musical film is based on the 1942 novel by Samuel Hopkins Adams. Directed by George Sidney, this Western-themed story pits characters played by Judy Garland and Angela Lansbury in a love triangle with John Hodiak. Set in the 1890s, the film follows the waitresses from the chain of Harvey House restaurants, who set up a new establishment in the Wild West town of Sandrock, Arizona. They have their work cut out for them, because there's already a saloon in town, with plenty of drinking, gambling and dancing girls as the local entertainment - and they're not keen on having to compete with a more respectable establishment.

Judy Garland plays Susan Bradley, a woman travelling to Sandrock to answer a blind marriage proposal. As her luck would have it, said husband is about thirty years her senior and even his personality won't cut it - since John Hodiak's Ned Trent was the one who wrote the love letters for him. And he's the one who runs the saloon. Susan joins the Harvey Girls and becomes part of the competition. Angela Lansbury plays Em, the main dancer in the saloon.