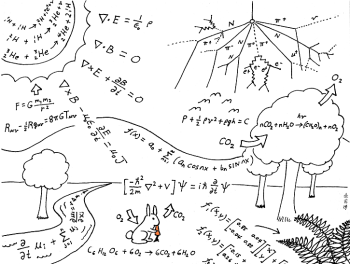 "Inchworm, Inchworm,
Measuring the Marigolds,
You and your arithmetic,
Will certainly go far.

Inchworm, Inchworm,
Measuring the Marigolds,
Seems to me you'd stop and see,
How beautiful they are."
— Frank Loesser, "The Inch Worm" from the musical Hans Christian Andersen (1952)
Advertisement:

This is the attitude that trying too hard to understand something prevents one from appreciating its beauty. It implies that appreciation is a feeling, not a number, and that reducing the divinely incomprehensible to the mundanely complex isn't just tedious and hard, it's fundamentally wrong.

This trope is, at heart, a reaction against hyper-intellectualism; fear and frustration with assigning a number or a scientific name to everything from rainbows to emotions. It could be summed up as "put away your calculator and enjoy the beautiful sunrise". It can appear anti-intellectual because it can imply that only people that don't know anything about a subject can appreciate it.

Naturally, experts in the given subject are repulsed by the False Dichotomy this attitude presents. Their understanding is never questioned, just their ability to appreciate it. Nobody has ever, for instance, advocated fielding Generals who know absolutely nothing about planning, logistics, strategy, or tactics but feel like they have deep psycho-spiritual connections with warfare. Experts that fully understand their field are actually very attuned to its beauty. You rarely, after all, spend a big chunk of time becoming an expert in something you don't appreciate. You can marvel at the visual beauty of a rainbow and be awed by the complex and delicate interplay of factors that allow it to exist.

Related tropes: This is a major gripe that Romanticism has against Enlightenment, and is the reason Doing In the Wizard isn't kindly looked upon. Doing In the Scientist is more its style. See Straw Vulcan, Hollywood Atheist, and Mother Nature, Father Science. One manifestation of this is Don't Explain the Joke. Compare Centipede's Dilemma, and Don't Think, Feel.

Compare/contrast The Anti-Nihilist, Awesomeness by Analysis, Enlightenment Superpowers, Emotion Suppression, Formula for the Unformulable, Geeky Turn-On, and especially The World Is Just Awesome for all the beauty missed by those who cannot see the pretty numbers in the page image.

Has nothing to do with the Otaku Surrogate character from Questionable Content, or with the play The Effect of Gamma Rays on Man-in-the-Moon Marigolds.