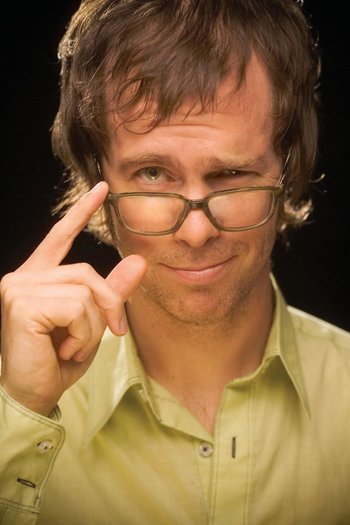 He's rockin' the suburbs!note Just like Michael Jackson did!
Advertisement:

In the mid-to-late '90s, he was the frontman for the Alternative Rock band Ben Folds Five, alongside bassist Robert Sledge and drummer Darren Jessee, who released three full albums to moderate critical success before amicably breaking up in 2000. Beginning with Rockin' The Suburbs a year later, he began a reasonably successful solo career.

Ben has also participated in a number of critically successful collaborations: he produced Has Been, a surprisingly well-regarded album by William Shatner, was a Pop-Star Composer for the Dreamworks Animation film Over the Hedge, wrote the album Lonely Avenue with novelist Nick Hornby providing lyrics, and recorded a chamber pop album, So There, with yMusic.

In 2009, Folds began judging on The Sing-Off, an NBC a capella contest. He's frequently cited as the most competent judge on the panel.

After recording a couple of new songs for his retrospective album, The Best Imitation of Myself, Ben Folds Five announced their reunion in early 2012, followed by the release of a crowd-funded new album later that year. The band made enough money from the donations to fund at least three more albums, though no further albums have been announced yet.

His output slowed considerably after the release of 2015's So There, a collaboration with the chamber orchestra yMusic, save a couple of live albums and a one-off singles "Mister Peepers" and "2020." Since then, he's largely busied himself online, appearing in videos with Pomplamoose and starting his own Patreon

page. In 2019, he published a memoir, A Dream About Lightning: A Life of Music and Cheap Lessons.