Late-Arrival Spoiler Warning: Everything below this section will have unmarked spoilers for the original Steins;Gate visual novel. If you have not watched the anime or read the visual novel and do not want to be spoiled, do not read this page. Avoid or read at your own risk. YOU HAVE BEEN WARNED. 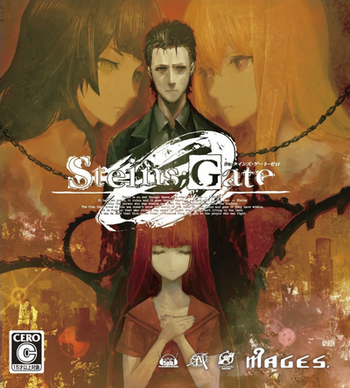 This is a story of the future I couldn't save.
Advertisement:

Steins;Gate 0 is a "true sequel" to Steins;Gate and the fifth main entry in the Science Adventure Series. It released on December 10, 2015, and once again stars Rintarou Okabe as the main character.

Rintarou Okabe, self-proclaimed Mad Scientist, managed to discover the secret of time-travel with his friends and they used it conduct their own experiments. However, their actions caught the attention of a certain organization, SERN, who retaliated by murdering Okabe's dear friend Mayuri. In order to save her life, Okabe continuously traveled back to past to undo their actions to prevent that tragic event from happening, but it comes at the cost of having to let Makise Kurisu die on the day they first met.

Though Okabe later learns that Kurisu's death serves as a catalyst for World War III in the far future of 2036, in an attempt to save her, Okabe accidentally ends up being the one to take her life. Filled with grief and despair, Okabe decides to abandon his life as a scientist and live in the world without Kurisu.

In an attempt to forget his traumas and get his life back on track, Okabe involves himself in his college, Tokyo Denki, and meets a trio of scientists- Maho Hiyajo, Alexis Leskinen, and Judy Reyes- visiting from Viktor Chondria University, where Kurisu attended. At a presentation in Tokyo Denki, Hiyajo and Leskinen unveil their greatest creation- Amadeus, an Artificial Intelligence that stores human memories. Okabe, agreeing to become a tester for the AI, has his old wounds re-opened when he meets Amadeus Kurisu, a being made from the memories of Kurisu that were stored in the device.

And just when Okabe thought it could not get any worse, yet another conspiracy surfaces. Mysterious and unknown forces are out to steal Amadeus for themselves while also aiming to get their hands on a time machine. Once again, Okabe finds himself thrown into the middle of madness and must find a way to keep Amadeus and the time machine safe and prevent the upcoming Third World War. If he can even muster the energy to work past his trauma, that is...

New designs and new characters were introduced in this game. The Phone Trigger was changed to Rine Trigger. The game also became substantially more nonlinear, with endings having widely different branches. In addition to the protagonist from the first game, Okabe Rintaro, many scenes are narrated from the perspective of Suzuha Amane and Maho Hiyajo. An animated adaptation by White Fox was announced in 2016 and premiered on April 12, 2018.

Daru knocks some sense into Okabe.

Daru knocks some sense into Okabe.