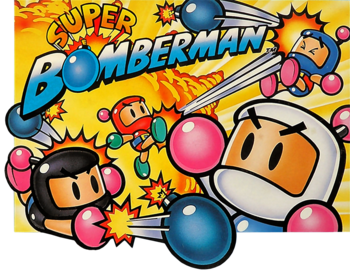 Super Bomberman is a series of Bomberman games released in the early-to-mid 90s for the Super Famicom/NES. The first two games were released internationally, the third was released in Japan and Europe, and the fourth and fifth games were Japan-exclusive.

The games make use of the classic gameplay formula: the stages are laid out in a grid pattern with enemies and destructible blocks. When all of the enemies have been defeated, the exit will open and the player can progress to the next stage. Some games instead require you to activate/destroy switches to open the exit. Super Bomberman 5 also gives several branching paths, and it is possible to reach the (good) ending without seeing 3/4s of the game.

The first Super Bomberman was one of the first SNES games to allow four-player multiplayer, which required the use of a Multitap device. It was largely through these games that Bomberman became synonymous with frenetic multiplayer. The third through fifth games upped this to five players.

In 2017, the series finally saw its first new entry in two decades, Super Bomberman R for the Nintendo Switch. The following year, the game was ported to Steam, PlayStation 4 and Xbox One. Super Bomberman R Online, a rerelease with a revamped Battle Royale-esque online mode and new characters and outfits, was released on September 2020 as a timed exclusive for Google Stadia.

In June 27, 2022, a sequel to Super Bomberman R was announced. Super Bomberman R2 expands the classic Bomberman-style gameplay with new additions like "Castle" mode, where one player defends their castle from 16 other players, and a new exploration mode and the return of the Battle Royale mode from Super Bomberman R Online.

Games in this series are:

With his dying last words, Buggler reveals that he will eventually reform out of the evil in the hearts of man.

Example of:
As Long as There Is Evil

With his dying last words, Buggler reveals that he will eventually reform out of the evil in the hearts of man.