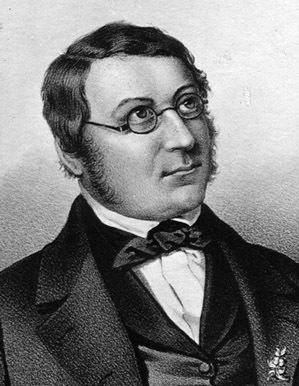 Romanticism Versus Enlightenment should summarize the work of Norwegian author Henrik Arnold Thaulow Wergeland (17 June 1808 – 12 July 1845), playwright, poet, political lobbyist and historian. He is arguably the trope codifier for the Norwegian romantic movement at large, and also the patriotic movement in Norway during the 1800s. In his day, he was a badass, or at least a badass boaster, writing poems and plays until his last cough. He died of two-sided Pneumonia at the age of 37.
Advertisement:

To be honest, he was Blessed with Suck because of his father, Nicolai Wergeland, who had been a member of the Norwegian Constituent Assembly, and made a lot of enemies. It is said that the son inherited a number of his father`s enemies, although it is known that he made up the best way he could. A natural Large Ham, it was obvious that Wergeland was able to make enemies all on his own, and was known for his quarrelsomeness on behalf of the less fortunate. He was prone to get himself into legal strife, and the greatest of those nearly ruined him. His wilfulness, and his ability to help the poor, made him a Folk Hero, and as such, he is also the biggest Memetic Badass in Norwegian literature. No other poet has ever been said to ride the rainbow.

Wergeland is probably most known in non-Norwegian countries for his political lobbyism on behalf of Jews. The Norwegian constitution was strikingly clear on not allowing Jews access to the realm, and Wergeland worked for years to get this paragraph amended. He finally succeeded, though it would take another six years after his death to get the case closed. Swedish Jews paid for his memorial monument in gratitude.

Wergeland was a friend to the commoners, and generally a pain in the ass for all cultural snobs. His quarrelsomeness made him a lot of enemies, and he was hunted down by lawsuits that nearly ruined him. He was also a hardass republican, ultra-patriotic, in a country mostly ruled by a Swedish king. The said king eventually gave him an occupation, which caused many of his earlier friends to turn him down.

The Norwegian leftist movement consider him a hero, and he became quite rightly a national icon. His massive production, makes him, however, somewhat hard to read, but most Norwegians can recite at least one of his poems. His influence is apparent in the plays of Henrik Ibsen and other writers.

Tropes found in the work of Henrik Wergeland: