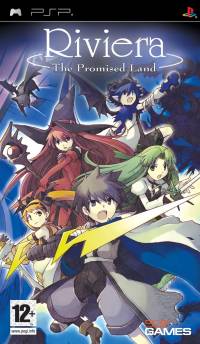 2002 Role-Playing Game produced by Sting Entertainment; Episode I of the Dept. Heaven series and chronologically the final story in The 'Verse thus far. Originally released on the Japan-only WonderSwan Color handheld, it was Remade for the Export on the Game Boy Advance and then on the PlayStation Portable. Both the GBA and PSP versions were published in the US by Atlus.

One thousand years ago, the gods and the most powerful demons enacted an extremely destructive war called Ragnarok. The gods, who otherwise would have lost, broke the taboo that mortal creatures must not have godly powers in order to create the Grim Angels, incomplete yet extremely powerful beings who were able to turn the tide. Afterward, the gods vanished, sealing their powers within the recently liberated land of Riviera and entrusting the rule of Asgard to seven proxies called the Magi. The Grim Angels, too, were sealed away until the time would come that their powers would once again be necessary to protect Asgard from the threat of demons.

In the present day, Hector, one of the Seven Magi, has discovered great demonic activity within Riviera. For the sake of Asgard, a pair of Grim Angels named Ein and Ledah are awakened and sent down from Asgard to Riviera to actuate the Retribution, using the power of the lost gods to destroy Riviera and take the demons with it. However, this will also wipe out the Sprites, the natural inhabitants of Riviera—who pose no threat to Asgard at all. Ein, being The Hero, is uncertain about this. When he and Ledah are almost to Riviera, a mysterious woman named Ursula appears to kidnap him and inflict him with Laser-Guided Amnesia, depositing him in a Sprite village. While there, Ein befriends several girls, and decides to work with them to protect Riviera from demons—and those in Asgard who still want to see the whole world destroyed for the greater good.

Riviera combines turn-based RPG battle systems with a Dating Sim-influenced affection system, minigame-influenced "AT screens", point-and-click style exploration, and a clever Inventory Management Puzzle integral to mastering the game. It is considered both the easiest Dept. Heaven game and the best entry point to the series, as it explicitly portrays the background conflict between Asgard and Niflheim that subtly influences all the other episodes.

In addition to the original game and its remakes, there are two spin-off cellphone games available in Japan. There are also two drama CDs, both of which provide important background for the characters. Other background information on Riviera and its world can be found in the Dept. Heaven canon bible, Dept. Heaven Episodes World Guidance.

with the game director and main artist.