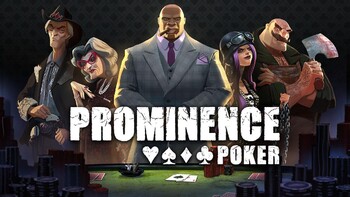 Prominence Poker is a game where the player takes on the role of a tourist visiting the city of Prominence, where he catches the eye of a powerful underworld authority figure known only as The Mayor. After playing a short tutorial, the player is then thrust into the role of a card shark looking to make a name for himself and grab a piece of Prominence that he can call his own.
Advertisement:

From there the player is free to tackle story missions against boss characters, take part in special events and battle other players in online ranked tournaments. The game is free to play and boasts a wide range of features that are constantly being updated, such as full avatar customization and different affiliations to join.