Video Game / Knights in the Nightmare 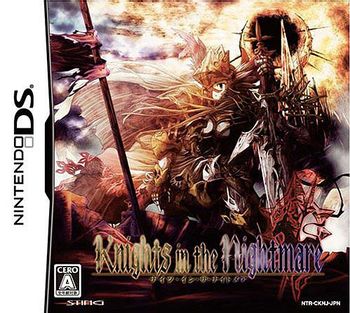 Knights really isn't too different from the other stylus-driven bullet hell strategy RPGs out there.

The third installation of Sting's Dept. Heaven cycle—confusingly designated "Episode IV" and chronologically placed between Yggdra Union and Riviera—and released for the Nintendo DS, Knights in the Nightmare tells the story of a mortal kingdom suffering a sudden influx of demons, which have killed most of the realm's knightly defenders. Compounding matters, the good King Wilmgard has vanished, and his political opponents seem to consider this a wonderful time to make their moves.

The player controls a disembodied spirit called the Wisp, brought (back?) into the world by a mysterious armored woman named Maria. The Wisp must recruit the souls of the dead knights, combat the demons, and piece together what precisely is happening to this world.

The game was localized in North America by Atlus and released on June 2nd. Keeping with ST!NG's habits, a PSP version of this game was released, with a bonus Yggdra mode available. A remaster was also released in 2022 for the Nintendo Switch, but only in japan.

Please note that this page, for the sake of the majority of players using the English language translation, uses Atlus' Romanizations of character names, although most of the older entries for Knights in the Nightmare across the wiki use those by Sting. Both Romanizations are listed on the character sheet, for those who wish to compare or clarify who's being talked about.

This game is particularly noteworthy for the extremely unusual gameplay elements that it uses; it's an odd combination of time-management, strategy, reflex, and Bullet Hell. None of the soldier units you control are in danger of being attacked, but the wisp (which is basically your stylus pointer) IS. It's also got a rather obtuse plot; unless you're paying attention, expect to get lost.

Knights in the Nightmare utilizes these tropes: